Office of the Pro Vice-Chancellor & Principal

Office of the Principal Menu 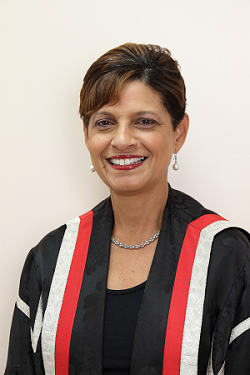 Dr. Luz Longsworth Is The Pro-Vice-Chancellor And Principal Of The University Of The West Indies (UWI) Open Campus And Is The PVC In Charge Of  Global Affairs. She Holds A Doctorate In Business Administration In Higher Education Management From The University Of Bath In The United Kingdom.  Dr. Longsworth Is A Graduate Of The University Of The West Indies Where She Earned Her B.A. In Spanish And French (First Class Hons.) And MBA (Marketing) Degrees And Also Holds A Master Of Arts Degree In Hispanic Studies From Queen’s University, Ontario, Canada.  In 2016, Dr. Longsworth Was Made An Honorary Fellow Of The Commonwealth Of Learning.

With over 25 years in both business and academia she has worked in the BVI, Belize, Barbados and Jamaica. In the UWI, she has served in various posts at the Mona and Open Campuses, including Director of the UWI Mona Western Jamaica Campus in Montego Bay, Jamaica, Resident Tutor/Head of the School of Continuing Studies in Belize, the Director of the School of Continuing Studies, and Director of the UWI Open Campus Country Sites, which covered 42 Sites in 17 Caribbean countries.  Dr. Longsworth currently chairs the UWI Press Board and is an Honorary Fellow of the Commonwealth of Learning. Her research focus is in the fields of Leadership Development, and Organizational Transformation in Higher Education.

The Office of the Pro Vice-Chancellor and Principal

The Office of the Pro Vice-Chancellor and Principal